The Drug Enforcement Administration (DEA) will be directing enforcement resources to methamphetamine “transportation hubs” — areas where methamphetamine is often trafficked in bulk and then distributed across the country.

While continuing to focus on stopping drugs being smuggled across the border, the DEA’s “Operation Crystal Shield” will ramp up enforcement to block their further distribution into America’s neighborhoods.

The DEA has identified eight major methamphetamine transportation hubs where these efforts will be concentrated: Atlanta, Dallas, El Paso, Houston, Los Angeles, New Orleans, Phoenix, and St. Louis. Together, these DEA Field Divisions accounted for more than 75 percent of methamphetamine seized in the U.S. in 2019.

“Operation Crystal Shield” builds on existing DEA initiatives that target major drug trafficking networks, including the Mexican cartels that are responsible for the overwhelming majority of methamphetamine trafficked into and within the United States. DEA domestic seizures of methamphetamine increased 127 percent from 49,507 pounds to 112,146 pounds from FY 2017 to FY 2019. During the same time frame, the number of DEA arrests related to
methamphetamine rose nearly twenty percent.

Click here to watch the raid of a meth production lab.

“For decades, methamphetamine has been a leading cause of violence and addiction – a drug threat that has never gone away,” said Acting DEA Administrator Uttam Dhillon. “With a 22 percent increase in methamphetamine-related overdose deaths, now is the time to act, and DEA is leading the way with a surge of interdiction efforts and resources, targeting regional transportation hubs throughout the United States. By reducing the supply of meth, we reduce the violence, addiction, and death it spreads.”

DEA New Orleans Field Division Special Agent in Charge Brad L. Byerley said,  “Methamphetamine destroys lives and is one of the primary drivers of violence across the nation, including here in our four-state region. Operation Crystal Shield will build on DEA’s ongoing efforts to hold meth dealers accountable. We will continue to seize their profits, shut down their distribution networks, and put dealers where they belong – behind bars. By continuing to target local distribution networks in this transportation hub, DEA and our federal, state and local law enforcement partners are working to reduce violent crime and improve the quality of life for the citizens in our area and beyond.”

“For years, Mississippi has been inundated, and some of our citizens have struggled, with the curse that is methamphetamine. But I am hopeful that we will look back one day and say that, in 2020, we began reversing that devastating trend with today’s launch of Operation Crystal Shield.  I am excited that the Department of Justice and DEA is making it a priority to attack the transportation hubs from which this poison is being distributed into our communities. Our office stands ready to continue its partnership with DEA and our state and local law enforcement in order to eradicate this danger from our communities and keep our citizens safe,” said Mike Hurst, U.S. Attorney for the Southern District of Mississippi.

The DEA New Orleans Field Division, which covers Louisiana, Mississippi, Alabama, and Arkansas, is seeing a significant increase in the amount of methamphetamine seized, up 58 percent in the last year. As a transportation hub, we are committed to using all our enforcement resources to attack this problem. Specifically, we are enhancing our interdiction efforts, which target transportation hub facilities utilized by the drug trafficking networks. Further, we have assigned additional personnel, to include more Task Force Officers, to focus on interdiction investigations.

Virtually all methamphetamine in the United States comes through major ports of entry along the Southwest Border and is transported by tractor-trailers and personal vehicles along the nation’s highways to major transfer centers around the country. It is often found in poly-drug loads, alongside cocaine, heroin, and fentanyl.

Parents and children are encouraged to learn more about the dangers of drugs by visiting DEA’s interactive websites at www.JustThinkTwice.com, www.GetSmartAboutDrugs.com, and www.dea.gov. 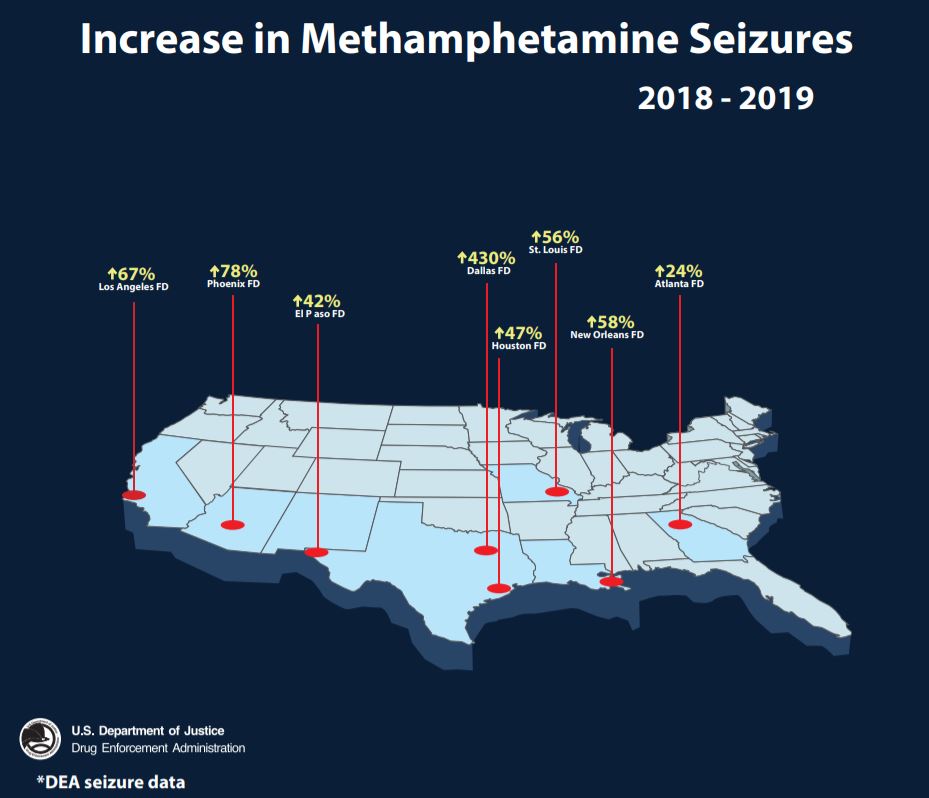