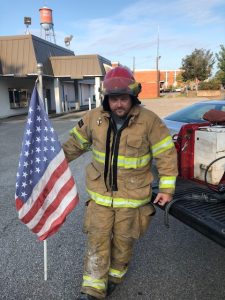 19 years ago today, I remember arriving at work and hearing on the radio the initial report of the first plane hitting the World Trade Center.

My first thought was that it was a terrible accident.  There was no way for any of us to foresee, or even comprehend, the terror which would unfold over the next several hours.

September 11, 2001.  I remember walking into the newsroom, seeing the live coverage on television, and immediately getting to work.  It wouldn’t be until much later in the afternoon, and strangely I remember standing at the copy machine when I broke down completely.

Still, to this day, I get a knot in my stomach when I think of the lives lost in that horrific act of evil.  However, when I see acts of remembrance and love, like what I am about to share with you, I am reminded of the human spirit and that it is ultimately good.

This morning, one of my coworkers, Wanda Russell, was driving to work on Highway 15.  She noticed a fireman, kneeling, and holding an American flag.  Russell is the General Manager of SuperTalk Mississippi, 103.3 in Meridian.

Curious, Russell stopped and talked to the man who had been there for over an hour.  His name is Austin Cunningham and is the 2nd assistant Chief of the Decatur Fire Department and Public Safety Instructor with the City of Meridian.

Cunningham explained why he was there.  “September 11th.  I do this in remembrance of firefighters who died in the towers.  19 years ago, I lost 343 brothers and sisters.”

Cunningham said earlier in the morning, Decatur Police Assistant Chief, Josh Walker, was kneeling with him before work. “We do this in remembrance of the police officers, the EMTs, paramedics, and firefighters who died that day.”

Cunningham and Russell talked about the children who were not born when the tragedy took place. Cunningham said, “Every school bus that comes by is the reason we’re out here.  The kids are going to look and they’re going to ask questions.  “Why are they doing that?” or “Why this day?” They may not get the right answer, but they are asking the questions.”

Russell said, “When I saw him (Cunningham), I got chills and a tear in my eye because people like this gentleman will continue to remind us of that fraternity they lost, what we lost as a nation, and what we have regained.”

The attacks which took place on September 11, 2001, claimed nearly three-thousand lives as terrorist hijackers flew two planes into the World Trade Center, a third plane into the Pentagon, and a fourth into a field in Shanksville, Pennsylvania.

Austin Cunningham and Josh Walker are two examples of the human spirit and why, regardless of the state of the world around us, I believe hope and decency remain.

The post Decatur fireman takes a knee for the fallen appeared first on News Mississippi.