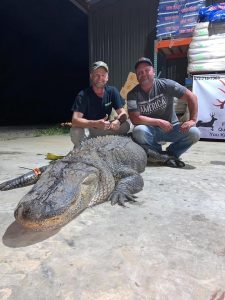 Mississippi’s alligator hunting season wrapped up on Monday, September 7th, and by the looks of it, the season was a success.

According to the Mississippi Department of Wildlife, Fisheries, and Parks (MDWFP), the alligator was only 76.375 inches in length when it was originally tagged on the Mississippi River Mainline Levee near Halpino Lake in 2011.

MDWFP says the information is enlightening on growth rates of wild alligators of this size. MDWFP alligator program coordinator Ricky Flynt estimates the average annual growth for most tagged alligator returns in Mississippi have been between 5-8 inches with many outliers above and below the average. Nationally, it is rare to document alligators of this size class with annual growth rates of this magnitude but are always associated with habitats with abundant and exceptional prey resources.

Interestingly enough, since 2003-2005, MDWFP notes this area of the Mississippi Delta has seen a tremendous increase in the Asian carp population. Wildlife officials say they have documented alligators feeding on the Asian carp on many occasions.  Individuals have also observed alligators feeding on carp floating in the waterways following a die-off and feeding on live carp. Alligators in this part of the state (tributaries of the MS River) have significantly more body mass than alligators anywhere else in the state.

In contrast, an alligator that the MDWFP captured and tagged on June 14, 2007, was harvested by a Pearl River/Ross Barnett Zone permit holder on August 29, 2020. The alligator grew only 24.75 inches over 13 years for an average of 1.9 inches per year and was harvested only 0.72 miles from its original capture location. The alligator was 11 feet 1 inch long when harvested by Cory Stewart.

At this point, 13 previously tagged alligators are reported to have been harvested by alligator hunters during the 2020 season.