The excitement continues to build as we inch closer to the 2021 college baseball season with both Ole Miss and Mississippi State releasing their respective schedules.

Both squads cracked the top 10 of D1 Baseball’s preseason rankings with the Rebels coming in at No. 6 and the Bulldogs right on their heels at No. 7. The season begins on February 19th as Ole Miss and Mississippi State will travel to Arlington, Texas for the State Farm College Baseball Showdown. While full details haven’t been announced, the showcase will be hosted at Globe Life Field—the home of the Texas Rangers.

Following their non-conference slate to open the season, Ole Miss will begin SEC play on March 19th against Auburn at Swayze Field while the Bulldogs open conference play on the road at LSU.

Southern Miss has yet to announce its full schedule, but it will include a matchup against the Bulldogs in Pearl on March 2nd.

This year’s 3-game series between Ole Miss and Mississippi State will take place in Starkville the weekend of April 16th. This will represent the only scheduled meeting between the rivals this season following the cancellation of the annual Governor’s Cup.

“Due to scheduling and logistical challenges related to the COVID-19 pandemic, Ole Miss and Mississippi State have agreed that the Governor’s Cup game in Pearl will not be played this year. While we are disappointed for our loyal fans in the Jackson area, we look forward to seeing our storied rivalry renewed during the scheduled three-game series April 16-18,”  a joint statement from the universities says.

Both teams hope to pick up where they left off when the 2020 season was abruptly canceled at the onset of the pandemic. At the time, the Rebels were riding high on a 16-game winning streak and the Bulldogs were 12-4.

The full schedules can be viewed below: 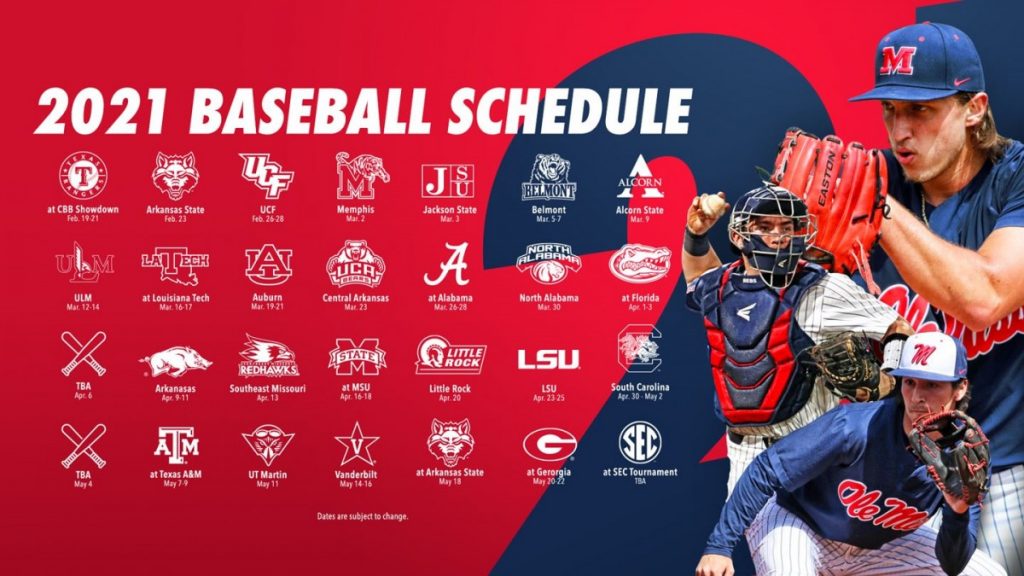