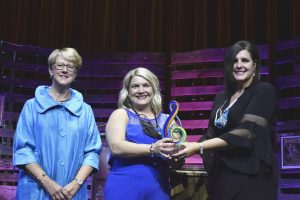 Proceeds will directly benefit the MuseumÆs education programs. The 2020 Virtual Gala was livestreamed from the Museum in Cleveland, Miss., and honored GRAMMY«-winning blues artist Bobby Rush with the second annual Crossroads of American Music Award. This yearÆs Gala also recognized Amy Killebrew, a teacher at Grenada Elementary School in Grenada, Miss., with the inaugural L.U.C.Y. Award.

ōDuring these times, support for our Museum and education programs is more important than ever,ö said Emily Havens, Executive Director of GRAMMY Museum Mississippi. ōWe want to thank all of our supporters, patrons, sponsors, artists, industry executives, and representatives who came out to support this Gala. We really could not have raised the $82,000 we did without them. WeÆre looking forward to continuing our important work in the community, and look forward to what this next year brings for GRAMMY Museum Mississippi.ö

Named after devoted Mississippian and community advocate, Lucy Janoush, who was instrumental in securing funding for the development of the Mississippi Museum, the L.U.C.Y. Award, which stands for Lifting Up Children and Youth, celebrates K-12 educators from the state of Mississippi who embody the educational mission of GRAMMY Museum Mississippi.

The annual GRAMMY Museum Mississippi Gala is the MuseumÆs signature fundraising event. Proceeds from this yearÆs virtual gala will benefit the MuseumÆs education program, which seeks to use music as a gateway to learning by inspiring and cultivating creativity, critical thinking, and self-expression.

For those who were unable to attend the GRAMMY Museum Mississippi Virtual Gala but are still interested in making a donation to the MuseumÆs music education programs, donations are currently being accepted online.