When Congress convenes on Wednesday to certify the results of the 2020 Presidential election, one Mississippi Congressman will join the effort to block the official declaration of President-elect Joe Biden’s victory.

Ever since Biden’s victory was called in the days following the election, President Donald Trump has continued to contest the results without success as case after case has been rejected by courts at both the state and federal level.

This latest effort by a group of Republican lawmakers to block Biden’s 306-232 electoral victory is unlikely to amount to much, but Rep. Steven Palazzo issued a statement explaining his intention to join the House Republicans that will object to the results of several states won by the President-elect until “a thorough investigation of all evidence has been conducted.”

As it currently stands, Palazzo is the only member of Mississippi’s delegation in D.C. that has voiced their intention to vote against the certification of the results of the election. Senator Roger Wicker told Politico that he will vote to certify the election. Congressman Bennie Thompson (D) tweeted Sunday regarding the effort to cast doubt over the electoral vote.

“How can any Member of Congress challenge the legitimacy of Trump’s defeat when they were elected from the SAME ballot?,” the second district Congressman questioned.

The Democratic majority in the House of Representatives will likely render Palazzo’s stance symbolic while there doesn’t appear to be enough votes in the Senate to block Biden’s victory ahead of his inauguration on the 20th.

As some House and Senate Republicans prepare to support President Trump’s challenges, the President is facing new controversy after audio surfaced of him attempting to pressure Georgia Secretary of State Brad Raffensperger to “find 11,780” votes in the Peach State.

The post Palazzo will not vote to certify President-elect Biden’s victory appeared first on News Mississippi. 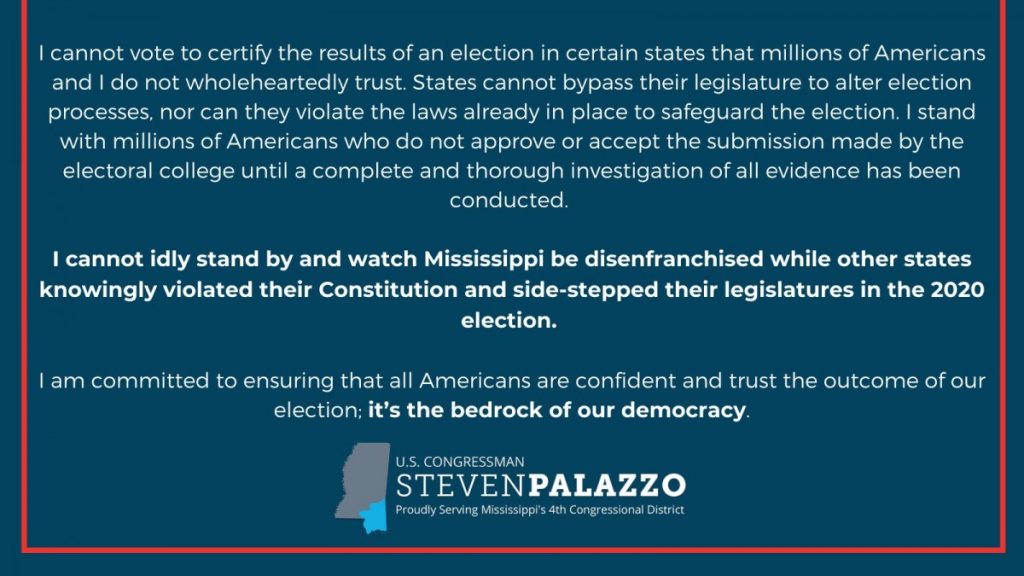