Below, you can read a recap of NSD from SportsTalk Mississippi’s beat reporters in Oxford and Starkville and take a look at Southern Miss’ 2020 class.

The newly-minted head coach is pleased with what he has, knows the class is small and declared the results will be better in the future.

“I know every coach gets up here and says this is the best class ever,” Kiffin said. “This is a good class with good players, but we will sign better classes every year we are hereafter this, deeper classes that fill all areas of need. We just didn’t want to reach for kids.”

The group sits at 18 kids with two transfers, eight mid-year enrollees and a couple of possibilities still out there — most notably five-star running back Zach Evans.

It was always going to be an uphill battle. Kiffin took the job 11 days before the early signing period began, inked 12 signatures in December with a makeshift coaching staff, spent the next month filling out his own roster of assistants while simultaneously getting kids to campus and building relationships with a finite amount of time.

To be clear, Ole Miss undoubtedly whiffed on a few today. Donovan Kaufman reaffirmed his pledge to Vanderbilt. Two-sport phenom Malachi Wideman is off to Tennessee. Marcus Henderson signed with Arkansas and the Rebels lost a commitment to Georgia in three-star corner Daran Branch. Kiffin cited a lack of time to build long-term bonds as a major factor.

**Signing day live tracker, who the Rebels got and who they missed**

“We lost some kids, obviously, like everyone does,” Kiffin said. “A lot of that was relationship-based. Other places had longer and more established relationships than we did. We are looking forward to next year already to build those relationships.”

The approach was more about signing the best prospects available rather than meeting needs, a byproduct of a lack of time and unfamiliarity of his own roster. Kiffin preached patience, citing roster attrition the spring and an entirely new scheme.

“Whenever you implement a new system, you’ve got to be careful just adding players,” Kiffin said. “We don’t really know our roster. We haven’t worked with these kids. It’s a different scheme. I think what usually happens is after spring, kids start to change positions and do different things in different roles.”

Ole Miss still needs to pad its deteriorating defensive line depth as it waves goodbye to Qaadir Sheppard, Benito Jones, Austrian Robinson and Josiah Coatney. The Rebels signed three defensive linemen and missed on one (Henderson) that would have helped greatly on the interior.

“We left ourselves some room and didn’t reach on kids just to fill spots,” Kiffin said. “That puts us in position for kids that are still out there and also puts us in a position for grad transfers, regular transfers and we can save some room for next year too.”

It is a bit unfair to make sweeping assumptions this staff’s recruiting acumen given the short window of time they’ve been in place. But it is also fair to criticize them for what is perceived as a weak close to this 2020 class.

When Kiffin arrived in Oxford, he talked about hiring a staff that would recruit nationally and develop a footprint that extends further than Ole Miss is traditionally accustomed to. On paper, the group Kiffin has assembled appears to be equipped to do so. Time will tell whether that actually comes to fruition, and the 2021 recruiting cycle will be a far better indication.

“We’ve already started on next year’s class, having a whole year to do that.”

There wasn’t any drama for Mississippi State on this Signing Day, as the Bulldogs added four players to their Class of 2020, three of which were committed prior to this morning. Coach Mike Leach welcomes these four players to Starkville…

Of that group, only Harvey made a Signing Day decision, flipping his pledge from Arkansas State to Mississippi State early Wednesday morning. The jewel of this group is Costello, the grad transfer from Stanford who will be expected to be Mississippi State’s starter for the season opener against New Mexico. Leach noted that the Bulldogs intentionally left some spots free, as he expects to be active in seeking players through the transfer portal. 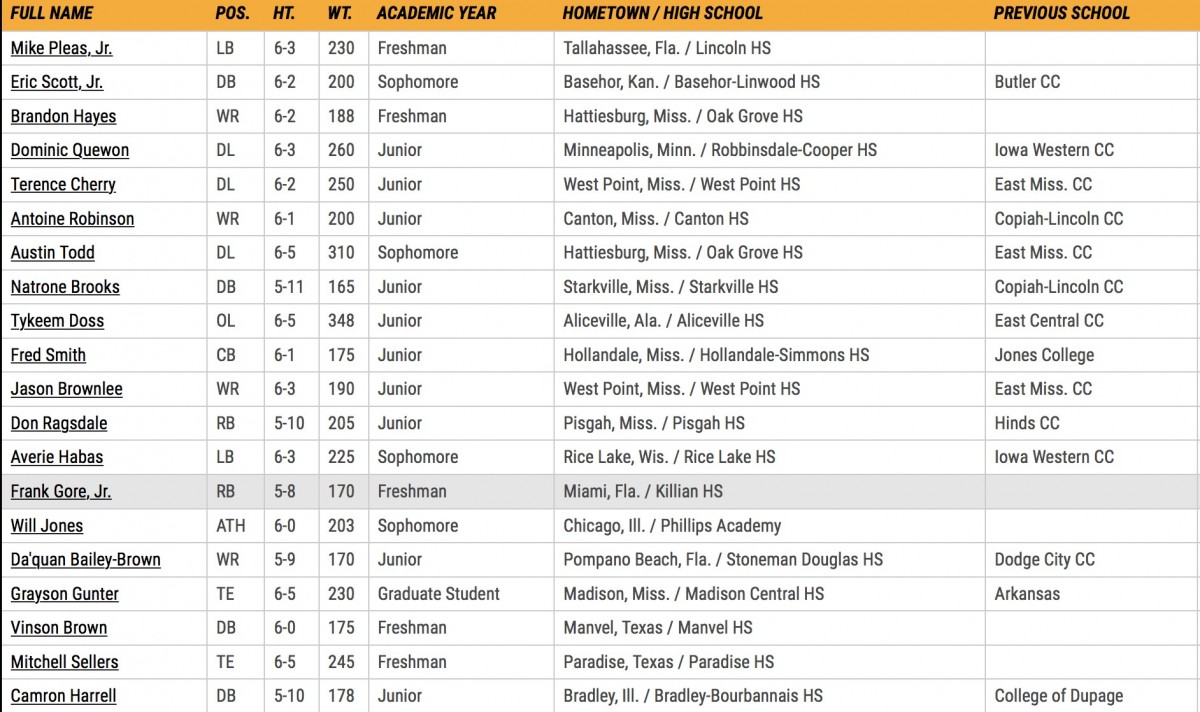