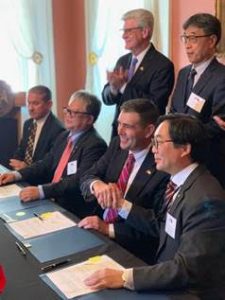 The Mississippi Department of Agriculture and Commerce, the Office of Governor Phil Bryant, the Mississippi Development Authority, and the Mississippi Farm Bureau Federation hosted a trade delegation from Taiwan which resulted in letters of intent being signed for the purchase of Mississippi agricultural commodities.

For the first time, the State of Mississippi was selected to participate in Taiwan’s Agricultural Trade Goodwill Mission, a procurement mission which has resulted in strengthened relations between Taiwan and the United States. During today’s visit to Mississippi, the Taiwan Vegetable Oil Manufacturers Association signed a letter of intent for the purchase of soybeans from Mississippi.

The second letter of intent was signed by the Taiwan Feed Industry Association to purchase Mississippi corn.  Commissioner Gipson signed the letters on behalf of the State of Mississippi which note Taiwan’s desire to purchase between 2020 and 2021 about 96 million bushels of soybeans at a value estimated to be $1.1 billion and 197 million bushels of corn estimated to be about $1.1 billion. The soybeans and corn will be purchased from farmers in Mississippi, Indiana, Illinois and Nebraska.  Each state participated in Taiwan’s Agricultural Trade Goodwill Mission.  The total amount will be divided between the states based on negotiations of producers and buyers.

“For the first time, Taiwan’s Goodwill Procurement Trade Delegation has chosen to do business with Mississippi,” said Governor Phil Bryant. “This partnership will benefit our Mississippi soybean and corn farmers and reaffirms our commitment to collaborate and strengthen our respective agriculture industries. Our efforts to put Mississippi on the world stage are hard at work.”

“We appreciate the Taiwan officials and industry representatives who traveled to Mississippi to learn more about our agriculture industry,” Mississippi Farm Bureau Federation President Mike McCormick said. “The U.S. has formed a strategic alliance with Taiwan and their trip was aimed at enhancing that trade relationship. We commend Governor Bryant and Commissioner Gipson for their hard work in making this dialogue possible.”

The delegation of Taiwan government officials and agriculture industry representatives was a follow-up from a recent trip to Taiwan taken by Governor Bryant and Commissioner Gipson, where they met with Taiwan President Tsai Ing-wen to promote Mississippi agricultural commodities.