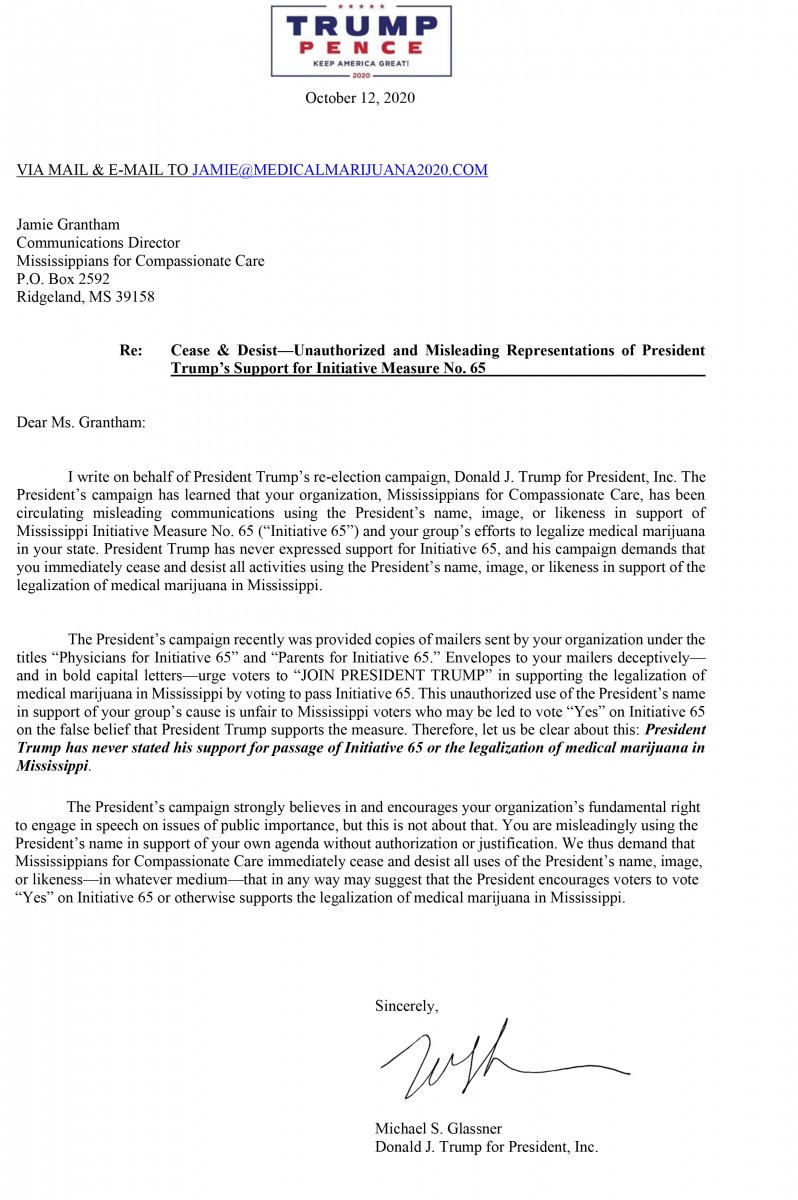 With election day just two weeks away, Mississippians are not only preparing to vote in several key races but also for the potential allowance of medical marijuana in the state in the form of either Initiative 65, a grassroots campaign, or 65A, the legislative alternative.

This comes after the MCC was allegedly sending flyers to voters in an envelope bearing the message “Join President Trump and 3 out of 4 Mississippi Republicans who support medical marijuana.” Throughout his first term, the president has been noncommittal on the use of cannabis for medicinal purposes and his campaign took issue with MCC’s unauthorized use of his endorsement.

Later on in the letter, the campaign emphatically states that “President Trump has never stated his support for the passage of Initiative 65 or the legalization of medical marijuana in Mississippi.”

Initiative 65 was placed on the November ballot after more than 220,000 Mississippians signed the petition circulated by the MCC. Alternative 65A was passed by the legislature back in March. If Initiative 65 passes, its language will be implemented into the state’s constitution which has drawn ire from state officials, including the Department of Health.

“Medical marijuana is a serious issue and deserves a fact-based discussion, but the Initiative 65 campaign is taking the playbook from Big Tobacco that said cigarettes were good for you,” Jim Perry, a board member of the MSDH, said. “Big Marijuana is spending millions to try to persuade Mississippians that they should give a $14 billion marijuana industry special protections in our State Constitution that will give them a free ride on taxes, take away the ability of local officials to regulate marijuana in their community, while also giving this big industry immunity from criminal and civil sanctions. Mississippians need to vote against Initiative 65 on November 3rd.”

Related: Initiative 65 v. Alternative 65A: What you need to know

MCC has criticized the legislature’s alternative, calling it an attempt to “confuse voters” in order to keep medical marijuana illegal in Mississippi.

View the Trump campaign’s full letter to MCC below: