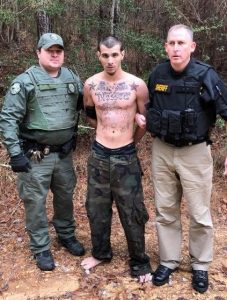 Three inmates escaped from the Covington county jail on January 15th. One of the three, Dillion Parr, was apprehended in Hot Coffee last Friday.

Two others are still on the run.

Authorities are looking for Alex Knight and Christopher Love.

Covington County officials say charges have been filed on several people for assisting in the escape as well as assisting the escapees to avoid capture.

Authorities say the hunt will not stop until these fugitives are in custody.

If you have any information pertaining to the whereabouts of Christopher Love and Alex Knight, call the Covington County Sheriff’s Department at 601-765-0005 or call 911.